COMMENTARY | New England States Must Act on PFAS in Pesticides

New England States Must Act on PFAS in Pesticides

PEER and the Conservation Law Foundation have sent letters to every New England state asking them to immediately halt the use of any pesticides known to contain PFAS and to test all pesticides for PFAS starting with those used most commonly. Those pesticides containing any amount of PFAS must be taken off the market. 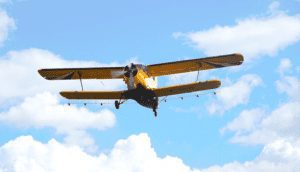 Last fall, PEER discovered PFAS (per- and polyfluoroalkyl substances) in Anvil 10+10, a pesticide used in the aerial spraying programs of Massachusetts, Florida, New York, and an estimated 25 other states.

PFAS should not be in pesticides. Known as “forever chemicals” because they never fully break down in the environment, PFAS build up in our blood, and are associated with cancer, birth defects, developmental damage to infants, and impaired functioning of the liver, kidneys, and immune system. In addition to these health risks, exposure to PFAS may make people more vulnerable to COVID-19 and diminish the effectiveness of the coronavirus vaccines.

Since the mid-20th century, toxic PFAS have been used in firefighting foam and in the manufacture of hundreds of household products like nonstick cookware, food wrappers, water-repellent clothing, and stain-resistant fabric.

PEER tested Anvil 10+10 for PFAS because we were concerned that PFAS was showing up in the drinking water supplies of Massachusetts’ towns with no obvious source of contamination. Over the years, Massachusetts has sprayed a mosquito control pesticide called Anvil 10+10 from airplanes across millions of acres of the state to curb Eastern Equine Encephalitis, an extremely rare but serious disease spread by mosquitoes.

Yet this attempt to protect human health is doing more harm than good. Not only has it been shown that the spraying does not work, but pesticides like Anvil are also poisons that pose risks to people and do harm to the environment.

So how did PFAS get into these pesticides? The EPA has said the PFAS in the Anvil seeped in from the containers storing the Anvil. But there is likely more to the PFAS-pesticides story. PFAS may also be entering the pesticides unintentionally during the manufacturing process, or they could be added as inert or active ingredients.

Our PFAS testing is likely the tip of the iceberg, since so few pesticides have been tested and we were only able to test for 36 out of 9,000 PFAS currently in use.

We are in the early stages of our investigation into the linkages between PFAS and pesticides. What we have discovered so far is another reason why PEER is pushing for PFAS to be regulated as a class and for a ban on all but essential uses of PFAS.