Originally published in and reprinted with permission of the Daily Camera. 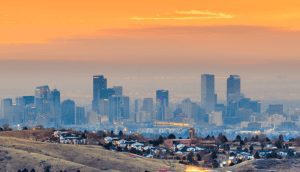 Take a deep breath. That is probably the quickest way to confirm that the Denver metro area has a serious air pollution problem.

In fact, Colorado has been badly out of compliance with National Ambient Air Quality Standards (NAAQS) for a decade now and our air is getting worse, not better. This is not supposed to happen. The Clean Air Act requires breathable conditions everywhere, including here.

Unfortunately, the Clean Air Act’s straightforward mandates have been eviscerated by ingrained bureaucratic malpractice on both the state and federal level.

The state agency responsible for enforcing the Clean Air Act in the state is the Colorado Department of Public Health and Environment. CDPHE is supposed to deny any permit that exceeds NAAQS limits or interferes with compliance. In practice, however, CDPHE almost never denies a permit for a facility emitting “criteria” pollutants, i.e., those pollutants required by law to be regulated because they to contribute to unhealthy levels of ozone or other harmful conditions.

Even worse, out of the nearly 13,000 air pollution permits CDPHE issued during the last five years involving criteria pollutants, only 42 went through a NAAQS compliance assessment. Think about that. Most every air pollution permit is issued to whoever asks for one.

How is this possible?

Well, Colorado has the curious and questionable policy of exempting facilities with emissions below 40 tons-per-year from submitting to NAAQS compliance verification. Those below this 40-ton threshold are called “minor sources” and not subject to the same regulatory review as major sources.

Then, Colorado goes one step further. It allows a facility to break up permits, down to minor source level, for different parts of each operation. For example, a natural gas compressor station applied for a permit to add six compressor engines to the facility, with combined emissions of 69 ton-per-year of NOx for the entire project. Rather than subject this expansion to a compliance verification, CDPHE issued six separate permits on the same date.

This route of circumvention is so prevalent that CDPHE has permitted only one major source in the last decade. By contrast, thousands of small facilities are permitted per year and hundreds more major sources have been allowed to subdivide their permits down to minor source levels with no required pollution compliance verification at all.

Thus, the overwhelming majority of industrial facilities that applied for an air permit in Colorado during the last decade were exempted from demonstrating air quality compliance. Yet, the science behind dispersion of pollutants in the atmosphere is exactly the same regardless of whether the emissions source is of major or minor status. So, this torrent of new permits is why Colorado is experiencing uncontrolled growth of NOx emissions. In other words, our air quality is being subjected to the proverbial death by a thousand “minor” cuts.

As a result, it should be no surprise that in the 11 years that these policies have been in effect, the ozone pollution in Colorado’s Front Range has deteriorated from marginal non-attainment, to moderate, then to serious, and now to severe.

This is the situation that CDPHE’s entire air modeling staff risked their careers to expose and remedy last year by formally and publicly asking the U.S. EPA to intervene. That caused the state to arrange a defensive “investigation” by a private law firm. However, the law firm confirmed the substance of the air modelers’ disclosure but concluded that the state practices, while questionable, were not flat out illegal.

The law firm was able to grasp this rather low bar because U.S. EPA has traditionally ignored minor sources, leaving them to state discretion. Yet, EPA must oversee Colorado’s air pollution program, so it must share responsibility for the steadily deteriorating air quality and the associated growing health threats to all residents.

The path forward now falls to the new EPA Regional Administrator for the six-state Intermountain area, including Colorado. That person is KC Becker, formerly Speaker of the Colorado House, who carries a strong environmental track record. As Administrator she has an array of tools she can use to induce Colorado to proactively address its serious and worsening levels of non-attainment. It will be up to her to resuscitate the Clean Air Act in Colorado.