PEERMail: Exploding in a Neighborhood Near You 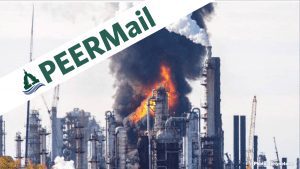 Politicians of both parties cite America’s crumbling bridges, dams, and other public infrastructure but few say anything about our aging industrial infrastructure.  Consider:

The net result is that the industrial accident risk in the U.S. is among the highest in the developed world.

Yet, there has been almost no regulatory progress in a generation. The one, very limited step taken under Obama has been held up by court challenges and Trump rollbacks.

In 2019, PEER and allied groups successfully sued to enforce a law ignored since 1990 requiring the Chemical Safety and Hazard Investigation Board (CSB) to obtain reports on all “accidental releases into the ambient air” from any industry within its jurisdiction. CSB now faces a court-mandated deadline to finalize the regulation by February 4, 2020.

In mid-December, CSB released its proposed regulation but that proposal is so narrow and weak as to be largely useless.  To illustrate how minimal this plan is, CSB estimates that it would take only 50 person-hours per year for all industries across the entire country to comply.

PEER and a coalition of groups are pressing to beef up the proposal so that affected communities, first responders, and regulators will remain without access to accurate, real-time information about dangerous chemicals released into their midst.

CSB should not throw away this once-in-a-generation opportunity to improve response to industrial fires, explosions, leaks, and other accidents. Help us make your community a little safer.

Corruption Corrodes Our National Parks. Offering wine-tasting, yoga-classes, and expensive destination weddings under the guise of “environmental education,” a network of non-profits has made a lot of money by evading rules to protect our parks visitors. PEER blew the whistle on these illegal operators, as confirmed by a new Inspector General audit. Perhaps most galling of all, these non-profits take park grants and subsidies but do not return a dime of revenue – unlike for-profit concessioners who pay a hefty franchise fee – back to the park system. Unfortunately, the same senior park managers who enabled these illegal operations are now supposed to clean them up.  We’ll be watching.

PEER also uncovered an illegal industry lobbying operation to push for allowing electric bikes onto federal land.  Pointed document requests led the Interior Department to hastily disband the “E-Bike Partner and Agency Group” which had been meeting officials behind closed doors in violation of the Federal Advisory Committee Act. Meanwhile, we are awaiting the government’s answer to our lawsuit to rescind the illegal edict allowing e-bikes on national park trails.

Biological Shadow Darkens Sunshine State.  A central paradox of Florida is a lush national bounty amid an economy geared to destroy that bounty, as illustrated by the fate of its two most iconic wildlife species.  PEER has exposed that the Florida panther has lost more than 100 of the cats on a net basis in just the past five years. Yet the official panther population estimate of “between 120 and 230” panthers has not changed.

The year 2019 also closed with a record number of manatee deaths from boat collisions. Florida’s manatee population has been going downhill ever since it lost its “endangered” status in 2017. PEER has litigated to protect both species and may have to (law)suit up again.

How Can We Miss You If You Won’t Leave?  Arguably the low point in the not very distinguished history of the BLM is the appointment of William Pendley, a self-described “Sagebrush Rebel” to lead the agency. Pendley has spent his career trying to dismantle BLM and now is in position to do so from within. PEER joined a coalition of nearly 100 conservation groups calling for Pendley’s tenure as BLM’s deputy director for policy and programs exercising “authority of the director” to end. In addition to being an awful choice, PEER points out that his appointment is illegal. Nonetheless, Interior Secretary Bernhardt just extended Pendley’s tenure for another 90 days. The only bright spot is that Pendley’s illegal status makes all of his decisions vulnerable to judicial reversal. What a heck of a way to run a railroad.