PEERMail | Lifting the Curtain on Corruption 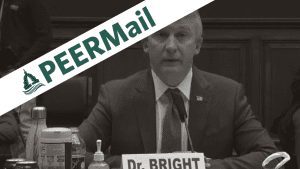 Trump’s response to the pandemic further shows a corrupt administration intent on disabling government, dismantling oversight, and purging those who disagree.

President Trump’s response to the COVID-19 pandemic further lifts the curtain on a corrupt administration intent on disabling government, dismantling oversight, and purging those who question their actions.

Take the case of Dr. Rick Bright. Yesterday, Dr. Rick Bright, the former vaccine director at the Department of Health and Human Services, publicly detailed in House testimony extensive wrongdoing by superiors at HHS and its Secretary, a member of the Trump Cabinet. Bright was ousted from his position for resisting the Trump administration’s efforts to promote the use of untested drugs to treat Covid-19 and for resisting the influence of industry consultants, including a company with ties to Trump’s son-in-law Jared Kushner.

Unfortunately, in our current broken system of oversight, the odds for meaningful action in response to Dr. Bright’s explosive allegations are slim. In a recent blog, PEER’s General Counsel explains how our system of safeguarding whistleblowers now largely depends on the consent of those who violated the law in the first place and why Dr. Bright’s case underscores the need for serious reform in our nation’s whistleblower laws.

During this difficult time, our goal is to fight to do everything possible to make these reforms happen and to stand with those who reveal corruption, fraud and deception. Thank you for supporting us in this effort.

PEER and the Western Watersheds Project have sued Interior Secretary David Bernhardt for violating the Constitution and federal law by keeping lower-level Deputies in place as the de facto leaders of the National Park Service (NPS) and Bureau of Land Management (BLM). The suit faults Bernhardt for illegally authorizing Deputy Directors David Vela of the NPS and William Perry Pendley of the BLM to act in the role of the Director of those important agencies.

President Trump has said he likes acting officials, “because I can move so quickly. It gives me more flexibility.” Indeed it does. It allows the Administration to hollow out government and gives private interests greater control over government affairs.

In a suit brought by PEER and the Hawaii Island Coalition Malama Pono (HICoP), the United States Court of Appeals for the District of Columbia ordered the Federal Aviation Administration and the National Park Service to adopt limits on noisy air tours in twenty-three National Parks within the next two years. The case involved the long-standing failure of the agencies to produce an Air Tour Management Plan as required by the National Park Air Tour Management Act (NPTMA) of 2000 in a single park. Last year saw more than 47,000 park overflights mostly concentrated over a dozen parks. Some parks are particularly hard-hit by constant aircraft noise. Hawaii Volcanoes, for example, sees as many as 80 flights a day.

The oil and gas industry is crowing about the removal of a Dr. Detlev Helmig, a world-renowned expert in atmospheric research at the Institute of Arctic and Alpine Research at the University of Colorado, Boulder. The abrupt termination comes two months after Dr. Helmig published a review of science of the last twelve years addressing the impacts of oil and gas drilling pollution in Colorado. PEER prepared a letter signed by a broad range of organizations and people asking CU Boulder to respond to Dr. Helmig’s requests for more information on his dismissal. PEER is asking for an independent investigation into the process.

Check out our recent blogs!