PEERMail | Something Extraordinary – A Whistleblower Wins

Something Extraordinary – A Whistleblower Wins 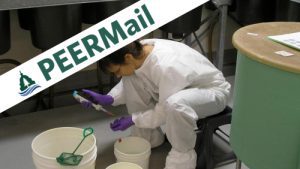 For nearly 30 years, Eveline (Evi) Emmenegger has been a microbiologist, working for the U.S. Geological Survey, mainly in its Seattle-based Western Fisheries Research Center (WFRC). For more than a decade, she managed its highest biosafety level containment laboratory studying aquatic pathogens.

Evi also served on, or chaired, internal committees on biosecurity and animal care. In recent years, she became increasingly concerned about maintenance and equipment failures at WFRC that threatened external release of deadly viruses and, in some cases, endangered the health of both researchers and research subjects.

Things came to a head in late 2017, when she discovered that the lab had been releasing pathogen-contaminated wastewater into the wetland adjoining one of Seattle’s most popular parks around Lake Washington for six months. It had gone undetected for so long because the lab’s chlorination system had broken down, but lacked an alarm to indicate when its chlorine line is clogged.

This breach violated conditions of WFRC’s state fish transport permit. It also compromised research results and may have spread dangerous diseases to local aquatic life. Evi felt legally and morally compelled to both report the violations to the state and to file a Scientific Integrity complaint against WFRC managers. She contacted PEER for help.

For months, USGS chewed on her Scientific Integrity complaint, but ultimately dismissed it because, while conceding that “science produced at WFRC may have been adversely affected,” there was no “intentional misconduct.” That dismissal in 2019 triggered a new downward spiral of reprisal familiar to many whistleblowers.

After removing Evi from committees and prohibiting her from inspecting lab equipment without permission, the same supervisor cited in her Scientific Integrity complaint began a process that led to a proposed removal in January 2020, based on alleged lapses in a research paper for peer-reviewed publication (using a fast-track dismissal process ordered by Trump, but since repealed by Biden). On her behalf, PEER rebutted the basis for the proposal and documented the clear retaliatory motives behind it.

For more than a year, USGS left Evi in limbo, barred from the office, forbidden from doing any further research, and placed on administrative leave awaiting a termination that could fall, like the proverbial Sword of Damocles, any day.

As months passed, the original “deciding official” retired; a new one was named, and he finally issued the decision to remove her last month in March 2021. PEER filed a challenge to that action with the U.S. Merit Systems Protection Board (MSPB).

Without contacting Evi or explaining why, USGS made a filing with the MSPB that her removal had been “rescinded,” her record cleared, awarded back pay, and would return to work on May 10th.

While we are happy that Evi has been spared years of litigation in the legal abyss MSPB has become, there are some remaining questions—

So, while Evi’s “case” is over, PEER will not be leaving her side until we get these questions answered.

In an unusual circumstance, the entire staff of air quality modelers at Colorado’s Department of Public Health and Environment has united to blow the whistle on illegal pollution permits. Their whistleblower complaint filed through PEER may be an early test of whether U.S. EPA’s new leadership will exercise responsible oversight over lax state pollution control programs. Read More»

Last fall, as Hurricane Zeta bore down on Louisiana’s coast, a deep-water oil rig refused to untether, leading to a near repeat of BP’s catastrophic deep-water blowout in the Gulf, which occurred 11 years ago this week. PEER uncovered the records after a belated “Safety Alert” by the federal offshore regulator, Bureau of Safety and Environmental Enforcement. We are asking the new leadership at the Department of Interior to investigate. Read More»

Our lawsuit to restore the ban on electric bikes on national park trails survived the government’s attempts to dismiss it. The court’s holding bodes well for our prospects to prevail on the merits in our litigation to rollback a Trump rollback. Read More»

PEER hosted a webinar on how to reform pesticide regulation at the EPA. The discussion focused on how EPA’s action, or lack of action, on PFAS are poisoning people, wildlife, soil, water, and air. The panel was moderated by Sharon Lerner of The Intercept and can be watched here. While there, be sure to subscribe to our youtube channel, so you can see all of our fresh content as soon as we put it out.