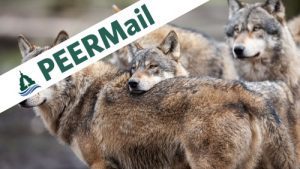 PEER, the Center for Biological Diversity, the Global Indigenous Council, and a coalition of 25 other Native American, conservation, and animal welfare groups have asked the Department of the Interior to stop the flow of federal funds that support the senseless slaughter of large predators.

Around the country, states are authorizing practices like baiting and snaring of bears, “judas” wolf collaring, use of dogs to hunt predators, shooting bears and their cubs in dens, shooting wolves and pups at dens, aerial spotting/land-and-shoot, and nighttime hunting with artificial lights.

This coalition has submitted a rulemaking petition asking the Secretary to withhold federal funds under the Pittman-Robertson Federal Aid in Wildlife Restoration Act from states that undermine national wildlife protection policies. In FY2021, the total amount of federal funds transferred to states under this Act was $678,894,449.

Together, we aim to stop federal support for state programs that encourage these killings by reinforcing current statutory requirements that states receiving federal funds are not compromising “healthy populations of wildlife.”

We hope you will join us in this effort by signing-on to our petition and show your support for naturally diverse wildlife populations and healthy predator-prey dynamics. Join us in the fight to protect predators and other at-risk wildlife.

Update: Our petition to Secretary Haaland was delivered October 27, 2021 and included over 17,000 signatures. Thank you for your support.

An independent investigation has confirmed whistleblower charges that the Colorado Department of Public Health and Environment improperly issued air permits that exacerbate air pollution in Colorado. Yet, the report has many shortcomings and fails to specify any recommendations for next steps. Read more»

Scientific Integrity a Beacon of False Hope at EPA

A new report issued by PEER shows how the Bureau of Land Management (BLM) is disregarding the agency’s own grazing data when analyzing ecological damage to habitats. Instead, the BLM is succumbing to political pressure and blaming ecological damage on wild horses. Read more»

Hair on Fire and Yes Packages!

PEER’s video of its webinar on corruption and mismanagement in EPA’s new chemical program and steps the Biden administration can take to improve the program is now available.  Watch now»