On May 11, PEER and Western Watersheds Project sued the Secretary of the Interior David Bernhardt, alleging that Bernhardt has used temporary appointees to lead the National Park Service and the Bureau of Land Management in violation of federal laws and the U.S. Constitution. This lawsuit gets to the heart of one aspect of the governance crisis gripping the United States—Trump and his loyalists are increasingly asserting unlawful powers to appoint high-ranking government officials while the Republican-led Senate abdicates its responsibilities. 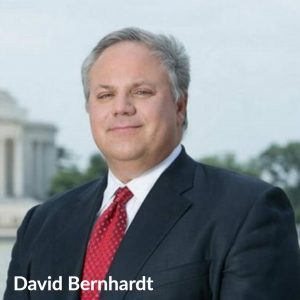 PEER and Western Watersheds Project sued the Secretary of the Interior, David Bernhardt, alleging that Bernhardt used temporary appointees to lead the National Park Service and the Bureau of Land Management in violation of federal laws and the U.S. Constitution.

Here is what our lawsuit is about—it shows that Bernhardt illegally appointed Deputy Director William Pendley to exercise the authority of the Directors of the Bureau of Land Management (BLM), and Deputy Director David Vela to be the de facto Director of the National Park Service (NPS). The lawsuit asks the court to rule that Pendley and Vela cannot exercise the Director’s authority because the Senate has never confirmed them under the “advice and consent” provision, Article II, Section 2, in the Constitution and because they have never been named or qualified to serve as “acting” Directors under requirements of the Federal Vacancies Reform Act, a law governing temporary appointments.

Both the BLM and NPS have been without Senate–confirmed Directors since Donald Trump was elected President. “I sort of like ‘acting,’ ” Trump has said. “It gives me more flexibility; do you understand that? I like ‘acting.’” According to the Washington Post, as of February 21st, acting officials have served a total of 2,736 days—more than seven years of combined time—across 22 Cabinet-level jobs. And that is not including sub-Cabinet positions that require Congressional confirmation, like the NPS and BLM.

The illegal Pendley appointment is particularly troublesome. This is his fifth temporary appointment since last summer. During this time, he has forcibly moved the BLM Headquarters from Washington, DC, to remote western Colorado, uprooting the lives of scores of seasoned BLM staff and disrupting an already strained agency. Meanwhile, Mr. Vela, whose current NPS appointment began on Sept. 30, 2019, has led a chaotic and inconsistent process on closing parks during the COVID-19 outbreak, which likely increased infection risks for staff, visitors, and local communities. He is now under pressure to assess the National Park System’s capacity to avoid dangerous overcrowding and new spikes of infection as parks reopen.

If either Pendley or Vela were actually named as “acting” Directors, the Federal Vacancies Reform Act would bar them from serving more than 210 days.  Instead, Bernhardt has ignored the Constitution and the Vacancies Act and now both men have been de facto Directors for much longer than 210 days.

These illegal appointments are just one of the tactics used by the Trump Administration to hollow out federal agencies and make them compliant to Presidential whims. Other tactics include the firing of Inspectors General who open investigations into Trump loyalists, retaliating against whistleblowers, refusing to let government officials cooperate with Congressional oversight bodies, publicly threatening civil servants perceived as “disloyal” to the President, and appointing an Attorney General who acts more like a personal attorney to the President.

Our legal system and our country’s norms have many different ways to limit the executive branch’s power. Trump, in an autocratic manner and with the help of supplicant cabinet officials such as Bernhardt, is sweeping these rules aside—and the long-term consequences for our country are frightening.

That is why this lawsuit is so important.