Washington, DC — For decades, the US Army Corps of Engineers has systematically failed to assess the environmental consequences of how it operates its dams, reservoirs and hatcheries in the Pacific Northwest, according to one of its own specialists represented by Public Employees for Environmental Responsibility (PEER).  Over the last three years, the U.S. Office of Special Counsel has been investigating the Corps response to the whistleblower’s charges.

Ms. Judith (Jody) Marshall served as a senior environmental resource specialist and as Section Chief of the Environmental Planning Section in the civil works division at the Corps’ Portland District office.  Her disclosure to the Special Counsel details how for years and, in some cases, decades, the Corps blocked reviews mandated by laws such as the Endangered Species Act, National Environmental Policy Act, Clean Water Act, and National Historic Preservation Act.

Her disclosure also lays out how the absence of meaningful oversight has led to serious damage to the Willamette, Columbia, and Rogue River watersheds, by –

“The law requires the Corps to make ‘informed decisions’ about its operations, but our management actively resisted any reviews,” said Ms. Marshall. “These watersheds are central to the environmental health of the Pacific Northwest, yet they remain unprotected from neglect and legally mandated oversight.”

After Ms. Marshall reported these legal violations to Corps senior managers, they chose to take no action but instead bullied and harassed her, including requiring her to wear a HAZMAT suit to work after she suffered severe reactions to chemicals used in an office remodeling. In frustration over stonewalling and mistreatment, she took early retirement in 2017.

“By shirking its legal obligations, the Corps also completely shut the public and stakeholders out of the decision-making process for these highly consequential facilities,” stated Pacific PEER Director Jeff Ruch, noting that the Corps took the position that because the dams and other facilities were built decades ago they no longer needed to be reexamined.  “The Corps has allowed ‘zombie’ dams to plod on for decades without any check on the havoc they wreak. We owe Jody Marshall a debt of gratitude for sacrificing her career to expose this entrenched and damaging dysfunctional management of water resource facilities.”

In forwarding Ms. Marshall’s disclosures to the US Army for investigation, the Special Counsel found they carried a “substantial likelihood” of validity.  The Special Counsel is now exploring whether the Corps’ promises to become compliant are credible and reasonable.

The HAZMAT suit the Corps made Ms. Marshall wear 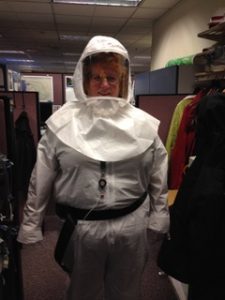