COMMENTARY | EPA’s Pesticide Office – A Plague on Us All

EPA’s Pesticide Office – A Plague on Us All 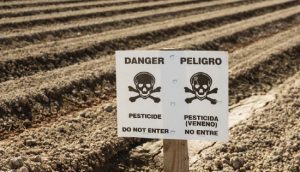 One of the most dysfunctional branches of government we have ever encountered is the U.S. Environmental Protection Agency’s Office of Pesticide Programs (OPP). This program is awash with scientific fraud, penetrated by rapidly revolving doors with industry, and infected by deep cronyism, where honest scientists are harassed, and industry hacks get promoted.

Think we are exaggerating?

Sharon Lerner, a reporter with The Intercept, interviewed over a dozen current and former OPP insiders. The result was a stunning profile entitled “The Department of Yes – How Pesticide Companies Corrupted the EPA and Poisoned America.”

To give some idea of how warped things have become, on the topic of study waivers, EPA routinely waives various studies that pesticide manufacturers are required to conduct concerning the health and environmental effects of their products, and is apparently proud of it. OPP managers announced a party to “celebrate 1,000 studies waived,” with a notation in the staff invitation that “cake will be served.”

The net result of this perverse non-protective approach – where marginalization of science is cause for celebration – is an ecological and public health disaster.

EPA has registered more than 18,000 different pesticide products – far more than any other nation. Some 2 billion pounds of pesticides sold annually in the U.S. are applied across more than 150 million acres of farmland, millions of acres of urban and suburban lands, and inside millions of homes, schools, and other inhabited buildings.

The cumulative effects of years and decades of this regulatory abuse are untold human deaths, disabilities, and illnesses. Our vital populations of pollinators – the key to American food security – are under biological siege from the indiscriminate application of highly potent pesticides. The health of non-target wildlife, as well as our soil and waters, is under chemical siege. Even our pets are at risk from irresponsibly approved flea and tick control products.

This state of affairs existed before Donald Trump and continues today, months after he has gone. It is truly a bipartisan dynamic fueled by a multi-billion-dollar chemical industry.

That is why reforming EPA’s thoroughly broken pesticide program will not happen without a powerful campaign of intervention. That is also why it is a top priority for us at PEER.