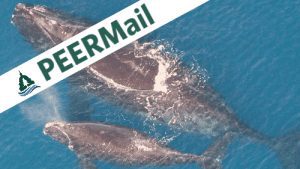 As the North Atlantic right whale careens toward extinction, National Oceanic and Atmospheric Administration (NOAA) leaders refuse to act on the findings of the agency’s own scientists to protect these whales.

PEER has documented how NOAA has repeatedly ignored its fishery scientists’ recommendations on ways to reduce ship strikes and entanglement. Where the cause of death is known, 100% of right whale mortality is from ship strikes or entanglements in fishing gear.

Documents obtained by PEER reveal NOAA Fisheries “only want[ing] to share good news” about right whales, in order to downplay the effects of fisheries on the species.  They also show that HQ is “freaked out” about the notion of the public discovering how entanglements harm right whales.

This inaction and overriding concern about “bad publicity” come at a time when we are living through a mass extinction that is unfolding at rates hundreds or thousands of times faster than at any time in the past tens of millions of years.

NOAA cannot run away from the fact that the North Atlantic right whale is going extinct, and that its extinction is entirely preventable. NOAA has powerful tools to protect the whale, but it is choosing not to use them.  In this case, NOAA is choosing extinction.

That is why PEER is doing everything it can to push NOAA to act to save the North Atlantic right whale. Thank you for supporting our effort. We couldn’t be doing it without you.

P.S. – Did you see this recent New York Times article, Northern Right Whales Are on the Brink, and Trump Could be Their Last Hope, which features PEER’s work?

AWOL During the Pandemic

PEER has released figures showing California’s workplace health and safety agency is suffering from many unfilled vacancies and a diminished presence in the field, resulting in a growing backlog of uninvestigated complaints of unsafe work conditions, occupational injuries, and deaths. “As California struggles to reopen, it is critical that the state is capable of protecting both essential workers and those now returning to the job,” stated Pacific PEER Director Jeff Ruch.

PEER has filed a complaint with the Commonwealth Office of Inspector General, providing the IG with state records that document the ineffectiveness of Massachusetts’s aerial spraying program as a disease-control measure. “In addition to all the other harmful side-effects, spraying carcinogenic immune suppressors over a wide area is not a very smart thing to do during a pandemic,” said Kyla Bennett, PEER’s Director of Science.

Pendley Must Step Down

The President’s recent nomination of William Pendley to be confirmed as the full Director disqualifies Pendley from remaining in his acting capacity, according to a legal filing by Public Employees for Environmental Responsibility (PEER) and Western Watersheds Project (WWP). Read why here .“A secret succession order does not pass either the laugh test or legal muster,” stated PEER Senior Counsel Peter Jenkins.

PEER General Counsel Paula Dinerstein recounts how we have witnessed the uncomfortable but indisputable undermining of federal whistleblower protections by the Executive Branch and members of Congress and what we can do about it.

Bill Dam, a guest contributor and now an independent environmental scientist, talks about his experience working with the U.S. Department of Energy investigating groundwater contamination from several former uranium mills and the struggles to get these cleanups right.