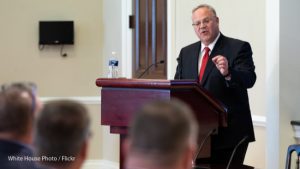 In a judicial smackdown ruling last Friday, Chief District Judge Brian Morris of the U.S. District Court for the District of Montana embarrassed Interior Secretary David Bernhardt, shredding his arguments that William Perry Pendley, the self-described “Sagebrush Rebel,” could and would remain the de facto leader of the U.S. Bureau of Land Management (BLM).

This ruling came in a suit filed by Montana Governor Steve Bullock which parallels a similar suit brought by PEER to oust not only Pendley but also de facto Director of the National Park Service, Margaret Everson (who does not even work at the Park Service).

It was satisfying to read how Judge Morris summarily tossed the absurd justifications Bernhardt has been using to justify this Potemkin personnel shuffle to evade the requirements of Senate confirmation. Consider some of the legal malarkey Bernhardt was peddling—

While this evasion of the Senate’s constitutional “advice and consent” powers is not limited to Interior, it has been perhaps most pronounced there. As a former Interior Solicitor, Bernhardt was supposed to know the law.

Yet, Bernhardt and his minions show a similarly slapdash grasp of the law governing topics such as climate change, endangered species, the National Environmental Policy Act, among others. This means that like Pendley, these many other actions already challenged in court, have a high likelihood of being invalidated.

Bernhardt was confirmed by the smallest margin ever for any interior secretary. At the current rate, he may leave the smallest legacy – and thank goodness for that.