Countering the Western War on Wolves 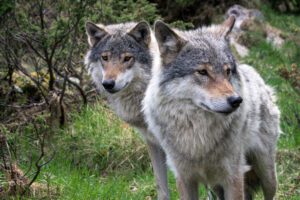 Wolves are being killed outside Alaskan national parks at such alarming rates that visitors have little chance to see them in the wild. | Adobe Stock

Following the removal of Endangered Species Act protections for the gray wolf in the waning weeks of the Trump administration, several Western states have declared open season on this alpha predator. PEER is working to curb the very practices that led to the near extinction of the gray wolf in the U.S., and ESA designation in the first place.

A typical example of these practices can be found in Idaho, which now authorizes killing 90% of the state’s 1,500 wolves through expanded trapping and hunting. In Wyoming, wolves may be shot on sight with no season or bag limit restrictions, save for one buffer zone outside Yellowstone. Meanwhile, Montana has a year-round open hunting and trapping season on wolves, with a “bag limit” of 20 wolves a year.

Wolves in Yellowstone and Other Parks

The reintroduction of wolves to Yellowstone National Park is both a major tourist attraction and one of the major conservation achievements of the 20th century. However, in this past year, 25 “park” wolves were killed, and one major pack completely wiped out, when they strayed beyond park boundaries into Montana. In response, Montana lowered the annual take for a single hunter to six for areas abutting Yellowstone. Nonetheless, the viability of Yellowstone’s wolf population is in question for the first time since their reintroduction.

Wolves in Alaska were never listed under the ESA, but that state is on a path to make wolves endangered. Its “Intensive Management” program to reduce predators, such as wolves and grizzly bears to increase “game” populations of caribou, moose, and deer, sets an annual goal of removing 100% of wolves in certain areas of Alaska. 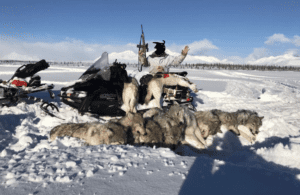 While Denali, Glacier Bay, and Katmai National Parks are closed to hunting, wolf populations within those parks have been decimated by hunting and trapping on park borders. The wolves of Denali have historically been one of the world’s most viewed. Yet, since the state removed the no-take buffers around the parks, wolf-viewing in Denali has fallen from the reported 45% success rate in 2010 to only 1% less than a decade later.

Similarly, Alaskan predator control has so diminished packs in the Yukon-Charley Rivers National Preserve that the National Park Service ended a more than 20-year research program because the wolf population is “no longer in a natural state” and lacks enough survivors to maintain a “self-sustaining population.”

PEER is leading a drive to deny federal wildlife management funding to states that excessively target predators, such as wolves, cougars, and grizzlies. This rule-making petition would have the Interior Department start enforcing requirements that federal grants must support diverse wildlife populations and healthy predator-prey dynamics.

This federal aid constitutes a significant portion of state game agency budgets. This year, approximately $1 billion in federal aid was funneled to state game agency coffers and accounts for between a quarter and two-thirds of the total state wildlife budget. Our petition is cosponsored by 25 conservation groups and garnered 17,000 signatures before it hit Interior Secretary Deb Haaland’s desk.

Meanwhile, we are tracing the misuse of federal wildlife aid by state agencies, seeking a return of misused funds and sanctions against miscreant agencies.

In Colorado, PEER exposed a senior state wildlife official who was using public resources in a private campaign against the reintroduction of wolves, as approved by state voters in 2020. This ended his attempts to block the release of wolves in Colorado and led to his removal from the program.

State wildlife officials know that they can enlist PEER in combating backroom dealing to the detriment of wildlife. And, importantly, PEER is willing to “name names” and go after conflicts of interest and other official misconduct.

Protect the Science – and the Scientists

In several states, PEER is working to protect agency and state university scientists whose work often draws retaliation from state livestock interests. We also work to prevent key research – such as studies showing that wolf removal does not lead to significant increases in elk population – from being buried under political pressure. In addition, we have directly taken on state legislators and politically connected ranchers who try to bully scientists into silence.

The net result is that PEER remains a national force for curbing rabid predator control and restoring ecological balance in America’s outdoors.

This commentary was originally published in the Fall 2022 edition of PEEReview.